A well-guarded caravan carries a cargo of potions to the towns in the South. Faen raiders mounted on giant bats swoop in, but mercenary mageblades repel the attack with sword and spell. Strange mage-priests work with vulture-headed harrids to carry out the last will of a long-dead and nearly forgotten god. This is the world of the Diamond Throne.

The land of the Diamond Throne is peopled by unique species: giants, humans, faen, litorians, sibeccai, verrik, and mojh. Each culture has its own behaviors, moods, concepts about nature and civilization, beliefs, magic, and styles of combat. PCs in Diamond Throne don’t just gain a few stats or abilities based on their ancestry—it drives their mindsets, view of the past, and approach to the future.

Ancestry  and culture are important parts of your background that enhance gameplay, character creation, and development, providing useful information about your characters before their adventuring life. They play a mechanical role similar to that of foci and descriptors in the Cypher System’s character generation process.

Humans are native to the lands of the Diamond Throne. For centuries, a cruel draconic race called the dramojh enslaved the humans, but those oppressors were wiped out by the giants. Humans remain under the rule of the giants, who sit upon the Diamond Throne today.

Magically created by dragons, the dracha are a sort of human-dragon chimera. They are found in the company of dragons or in small groups in service of a dragon master.

The spellcasting loresongs, nimble quicklings, and winged sprytes are three diminutive species referred to under the catch-all term faen.

They call themselves Hu-Charad, which means “the stewards,” but everyone else just calls them giants—and for good reason. Standing up to 12 feet tall, giants are otherwise proportioned like humans; to them, humans appear like children. 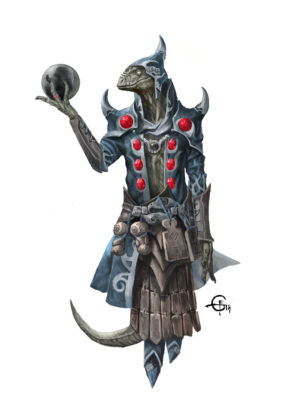 Litorians are cat-like, honor-bound hunters. Usually found roaming open grasslands far from the civilization of other species, litorians rarely separate from their tribes.

The results of magical modifications, mojh appear to be as much dragons as the humans they once were. They pattern themselves after the dramojh, or “dragon scions,” which long ago held mastery over the realm.

Strong and hardy, sibeccai are excellent warriors and fierce opponents. They were once simple beasts, native to a desert realm far across the sea, but the giants used magic to grant them intellect and the ability to form their own society and culture. The sibeccai have served the giants as soldiers and helpers for centuries.

Verrik are extremely wise and intelligent beings with special innate mental abilities. Verrik pride themselves on “contextual thinking.” They believe they see the world from a larger perspective, which leads them to make decisions based on ramifications that others may not see. They value intellect and reason, and despise rash actions.

NOTE: The final cover image and illustrations may differ. Follow the campaign!