There is not a Day 1 Diary, because yesterday was so surprisingly fast and intense we couldn’t do much apart following the wave that is carrying your love and passion to the Diamond Throne. We want to thank you all. You’ve come this far from all over the world and we are humbled by your kind words written in comments and mails.

Monte Cook’s Diamond Throne was launched. It reached the funding in less than 1 hour. It was not a small goal, since it was what needed to begin this adventure, but you did it!

We had two fantastic Early Birds many of you have chosen. 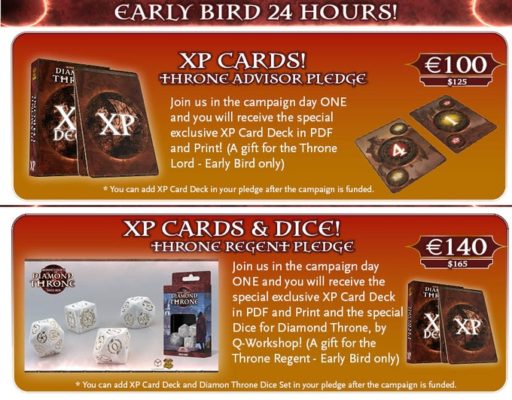 In the few hours after, you unlocked 4 SGs.

The first SG added Biagio D’Alessandro art. Biagio is a famous Italian artist who lives in the province of Salerno with his partner and two dogs. He has a “classical” artistic education – Art High School and Fine Arts Academy – but in the field of illustration, he claims to be self-taught. He has been working in the game industry since 2007 and has created awesome art for many important international publishers, such as Monte Cook Games, Paizo, Alderac Entertainment Group, Fantasy Flight Games, Schwalb Entertainment, Green Ronin Publishing e many more!

Maybe you had the chance to read some very long post from one of our game designers, Ilaria, before the campaign, so you already know that in Monte Cook’s Diamond Throne there will be many new materials that will be added and new options that will be explored. There are new places and ancestries and more in this core book thanks to you. This first Monte Cook’s Diamond Throne “Unearthed” SG is about this. 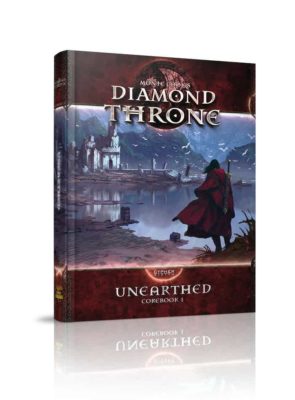 WIDTH OF A CIRCLE SAGA

The third SG unlocked is something we that we can’t wait to complete: a new 64 pages supplement (PDF and softcover). The first part of this supplement, MISSING HEADS, is an adventure, with details for characters, locations, and so on. You will find another specific section about the capital city of De-Shamod, with places of interest, secrets, and PNGs and new monsters.  All the material included is combined with the proposed adventure, but can also be used separately. This means that the new accessory is not just a trilogy of adventures, or just a monster manual, or just new spells and cyphers, but a rich and organized compendium to collect and expand the lore of the setting. 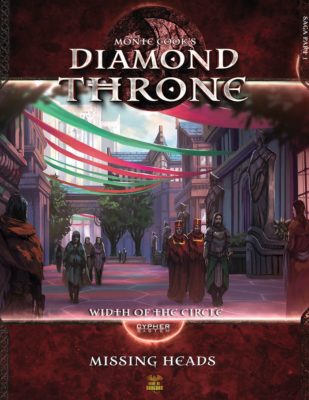 The forth SG was about character art. The new SG confirmed has added 3 of the most interesting concepts for Monte Cook’s Diamond Throne by Fabio Gorla, our Milanese tattoo artist and illustrator who attended the Art school and the School of Comics in Milan. He is very talented, his clients include Paizo and Black Book Editions. 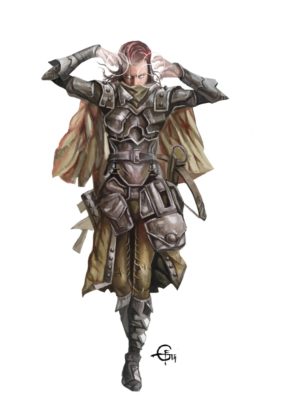 Then, in Europe (and New Zealand), the night came. But in USA, Canada, Australia you were pretty awake so another SG was unlocked.

We confirmed the fifth SG, 12 pages of content to ‘Evolved‘. As in the same previous SG for ‘Unearthed’, we can add useful material to this book. Now the Core Evolved has in-depth information on rules, equipment, and spells! 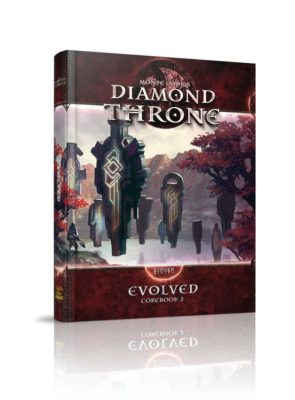 What is happening today

A sixth Stretch Goal has been unlocked.

WIDTH OF A CIRCLE SAGA

SECOND BOOK
The second book, HALL OF GLORY, is a new 64 pages supplement (PDF and softcover). Like the previous Saga Book Missing Heads, this is an adventure, with details for characters, locations, and much more. 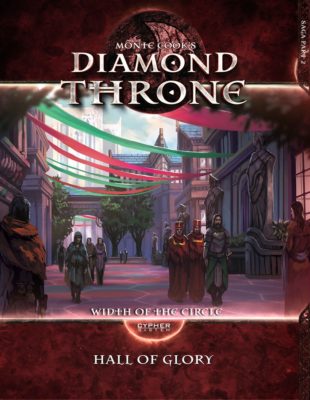 You can chose to add to your pledge one or more additional copies of the Corebook Set. Both in print and pdf, they will receive all physical and digital upgrades we will be able to unlock during the campaign. An important note is this: after the campaign PDF will be sold separately. So, this is a good opportunity.

These dice represent your bravery, your honor, your status in the lands of the Diamond Throne. Dice are made from the best material, crafted in a rich blend of cream and crystal hues with an ancient gold painting to mark the digits and the dragon engravings. On the highest faces of all dice there are symbols that represents the opulence and glory of their bearer. We love them! We love Monte Cook’s Diamond Throne!

This luxurious deck makes easy to award, spend and trade XP at the table. You’ll be proud of your XP, especially when awarded with these beautiful cards.

NOTE: The final cover image and illustrations may differ. Follow the campaign!