NEW TO THE DIAMOND THRONE?

Here it is a quick guide for you

The Diamond Throne is a hereditary seat of power that represents a giantish king or queen. The giants actually call their land Dor-Erthenos, which means in their own tongue, “land to the west.” This presents a somewhat ironic situation because while the giants (and the sibeccai, whom they brought with them) hail from the east, Dor-Erthenos is actually the farthest eastern land known to most people of the realm.

Each king or queen, also called the Lord or Lady Protector, is approved by a council called the Observance. If the Observance does not approve of an heir apparent, or sometimes even of a currently reigning monarch, they pass the position on to another relative or even another giantish noble family.

The current monarch, Lady Protector Ia-Thordani, has been in power only a few years. The single reservation the Observance had regarding her ascension to the Diamond Throne was her unmarried state. She is currently accepting suitors.

The Observance exists only to watch over the monarch and provide advice and counsel. This body has no other direct power. Some residents wish to see members of other races allowed into the Observance, but currently its membership is entirely giant.

The Lands of the Diamond Throne hold 16 different stewardships.

Members of nongiant races can become speakers, representing the causes and concerns of their race or area. The speakers work with the stewards and help govern the people in a region.

Ancestral aristocratic titles, in place since ancient times among humans, still remain and carry some weight—at least among humans. (The holdings and estates of dukes, earls, and counts still dot the landscape, particularly in the North.) Likewise, litorian tribes continue to follow their own chieftains, as they have for millennia, and faen communities in the Harrowdeep retain their own leaders as well. The giants recognize these positions as influential and important, but not as a part of their own government; in the eyes of giantish law, a human noble or litorian chief is no more or less than any other individual under their rule.

Under the Diamond Throne, the cities have become connect- ed with well-maintained, paved roads wide enough even for the passage of large giantish wagons pulled by radonts. Aqueducts transport water to soak the crops and to provide communities with adequate safe water. Giant patrols prevent, or at least decrease, attacks by dangerous beasts and raids by bandits and other enemies, such as the chorrim.

Giantish cities are a wonder to behold. The giants present everything, from the wide, paved streets to the looming buildings and staggeringly tall towers, on a dramatically large scale. With their masterful crafting techniques, the giants work stone so that it has no seams or joints. Structures have a natural look, interior chambers feel like well-lit caverns, and everywhere the buildings accommodate trees and plants, filling the city with life. Giantish cities are laid out with wide plazas (usually containing multiple fountains), carefully engineered aqueducts, and well- maintained, broad roads leading in and out. These engineers always build a city as a series of circles radiating out from a central hub. Occasionally, depending on the terrain, they may lay them out as a number of circle patterns radiating form different hubs. Giantish cities always have well-maintained sewers with large channels.

Since the giants’ arrival, the giantish style of architecture has gained popularity even in places where giants are few in number. Twenty- foot ceilings, 10-foot-wide hallways, and huge doorways are commonplace throughout the realm.

Humans are the most numerous and widespread race in the Lands of the Diamond Throne. With the exception of the deep- est reaches of the Harrowdeep (and the frozen wastes beyond), and the heart of Zalavat, where they are not welcome, humans live throughout the entire realm, at least in small numbers. (There are certain areas of the Bitter Peaks, Thartholan, and the Wildlands of Kish, for example, that offer dangers too great for settlers, and the only humans in Skaraven are slaves.)

The giants, as a race, never stray far from the water—the love of ships and sailing runs too deep in their blood. Thus, the vast majority of giants live on the coast or along the banks of the largest river in the land, the Ghostwash. Giants are known only by reputation south of the northern edge of Fallanor (except for along the coast), in most of Zalavat, and west of the Bitter Peaks. Although sibeccai usually dwell near giants, they have gone farther afield in the last hundred years or so, spreading south into the Southern Wastes and into the mountains to the east and west. They are virtually unknown as far south as Fallanor, the Wildlands of Kish, and most of Zalavat.

Faen dwell mostly in the north, in and around the Harrow- deep. In addition to their own isolated hamlets and villages in the forest, they frequent the Crystal Fields, the northern Elder Mountains, and cities such as Navael and Thayn. However, being fairly curious and daring, faen individuals can be found anywhere.

Most people think of litorians as keeping to the Central Plains, but in fact they range throughout the lands south of the Harrowdeep, even into Zalavat, Fallanor, and the Jungles of Naveradel. They are not unknown in Verdune, Thartholan, Kish, and into Pallembor, the Mysterious West. Litorians are second only to humans in their propagation and population.

Verrik hail from the South, specifically Zalavat. To find a verrik in the North, particularly north of the Ghostwash, is a surprising circumstance. Elsewhere, particularly in the warm climes of the South—Fallanor, the Free Cities, the Wildlands of Kish, and the Jungles of Naveradel—verrik thrive in numbers. Many also dwell in the island kingdom of Noll.

Mojh live in small numbers almost anywhere that humans dwell. They favor remote locales and seem rather impervious to climate, so one could look for a small mojh colony high above the snow line in the mountains, in the dry Southern Wastes, or in the Wildlands of Kish and probably find one. 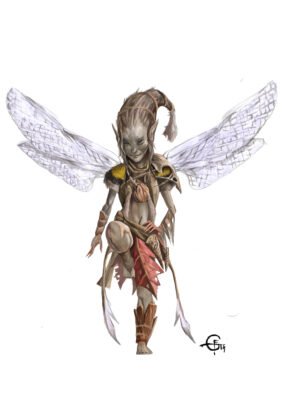 None of the major races—giant, human, faen, sibeccai, litorian, mojh, and verrik—are broadly recognized as outright enemies. However, certain races get along with some better than others.

Giants and faen get along about as well as members of two races possibly could. The predilections of both folk complement each other. Both appreciate the importance of balancing duty with celebration and relaxation. Really, though, giants look at all races with the same sort of “little brother attitude” (as the human philosopher Dionest once put it).

Faen hate it when people look down on them because of their size. They normally go into any relationship assuming they will be treated as equals. They only feel resentful when others prove them wrong. Thus, more than any other race, they are likely to judge people as individuals rather than react to them based on their race. (Dionest once put it another way: “Faen ignore the race of those they meet and treat everyone the way they would treat another faen. Of course, that means they are continually surprised when others do not act like faen.”)

Sibeccai remain somewhat distant from all races save the giants. In particular, however, they do not mix well with faen and often find themselves resentful of litorians. They frequently make no attempt to conceal these feelings, but change their behavior only when individuals prove their worthiness of respect.

Litorian philosophy encourages them to look upon all creatures with the same amount of respect (although initial wariness is always in order). However, their natural inclination was to resent giants, as some humans do, even if they show it more subtly. But over the years, the giants have gradually won their respect. These same instincts make them somewhat hostile to mojh and sibeccai at first, but they try to overcome them. Mojh look at almost every race with the same slight distrust.

Verrik are inscrutable and stoic. While they believe their way of thinking is best, they are less likely than, say, humans to judge members of other races for their differences. They perhaps understand giants and humans best of the other races, finding litorians and faen a bit bewildering at times. Verrik also deal well with mojh and sibeccai, but find them, in general, a little dangerous.

Some humans resent giants as outsiders who have “taken over.” Generally, they are wary of the harsh, sometimes cynical sibeccai and the mojh—humans who willingly gave up their humanity. Like the other races, humans are a bit disturbed by the verrik, despite the fact that in the history of the realm, humans and ver- rik have never actually come into conflict. Humans like faen but sometimes do not take them as seriously as they should, much to the humans’ loss and the faen’s displeasure.