Every culture has its own name for the world, but in the Common tongue of humans it is known as Serran. Deep in all racial consciousness, known also as the akashic memory, lies the truth of the creation of the world, although the exact date of that event is contested.

A single moon hangs high in the Serran sky. On clear nights, most people perceive it as having a light blue hue. In the middle of summer, however, it is bright white. The moon shares the night sky with five planets. During the day, the sun is a warm yellow.

The Lands of the Diamond Throne are but a (large) part of a single continent on Serran, which in turn is part of a larger land mass. The most explored portions are frequently called “the realm” in addition to the “Lands of the Diamond Throne.” Historically, the area was called Terrakal, and before that, the entire continent was simply “the Land of the Dragons.” The giants of today call it Dor-Erthenos. The southernmost edge of this continent lies about 700 miles above the world’s equator. In recent days, more has become known about the continents of Pallembor—the Mysterious West—and Skaraven, where the wicked avian humanoids known as harrids come from (see Chapter Twelve: Creatures). And at least one other continent is known to exist, to the far east, from which the giants and sibeccai originally hail.

Serran is ever so slightly smaller than the Earth on which we live. The main portion of the region — the realm—is about the same area as the United States, albeit configured very differently. This helps explain why most people living in Dor-Erthenos know little to nothing about the Free Cities of the South, and vice versa. Given travel times and the hardships involved (without magic), few travelers make it such a distance, and to do so can take months. 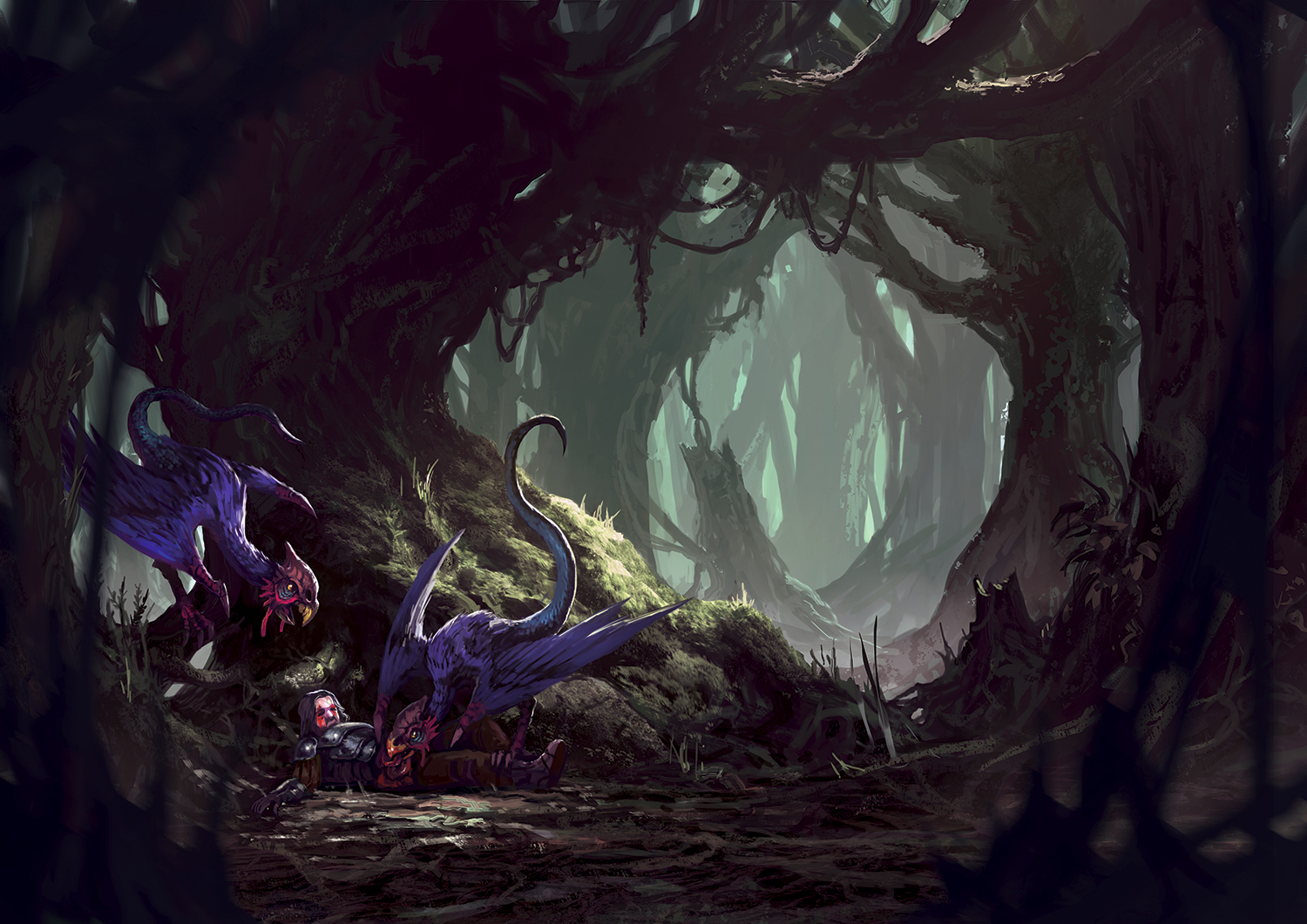 Harrowdeep
To the northeast, a barrier almost as impenetrable as a sea exists in the form of the Harrowdeep. This forest is deep and dark, and it gets deeper and darker as one heads north. Even the faen who call the place home do not know the forest’s northern limits. Presumably, it eventually is consumed in the ice of the eternal winterlands said to await travelers at the “top of the world,” but no one knows for a fact. This forest exemplifies the ideal of a thick, impenetrable woods. Take even a few steps into the woods and suddenly the sun’s light dims, as it is filtered through a thick canopy of leaves. A traveler can see only a dozen or so yards ahead due to the thick growth. And it only gets denser as one goes deeper. The Harrowdeep can be an extremely dangerous place for the unwary or the unprepared. Monstrous plants such as archer bushes, carnivorous trees, hangman trees, strangleweeds, and tendriculos live in these woods in large numbers. Further, cockatrices, dire animals, giant vermin, goblins, goblin bears, griffons, satyrs, trolls, volts, and more populate the Harrowdeep. The trees themselves can move, at least a little bit, once a traveler gets a few miles from the edge of the forest. While no one ever sees them move, the paths through the woods change from day to day and sometimes even disappear altogether.

The Crystal Fields
The Crystal Fields lie just north of the largest concentration of dramojh ruins, but they are far older. In this apparently natural expanse, mile after mile of crystal “growth” thrusts up from beneath the surface of the earth. Occasionally miners and collectors come here to gather valuable crystal, but navigating the fields is extremely treacherous; getting around in this sharp, jagged terrain is difficult, and the brittle crystal has been known to give way beneath explorers.

Elder Mountains
The Elder Mountains are, as the name implies, ancient, worn peaks, which parallel Dor-Erthenos’ coast before plunging south into the heart of the Southern Wastes. Here they provide a barri- er between that rocky desert and the more verdant wilds of Fallanor. Two wide passes lead through the Elder Mountains: one in the Ghostwash river valley, and the other, known as Burkut’s Pass, north of the verrik capital Yrterot. Other passes, such as Goat’s Road between Jerad and Khorl, are narrower and can prove more treacherous. The highest peak in this range is Jasandapur. The Elder Mountains hold many secrets pertaining to the days before the reign of the dramojh. Here can be found some of the last legacies of the mysterious crystal weavers, beings able to spin crystal like thread, and their powerful magic. The mountains are still populated by two races, the faradians and the grynlocs, both of whom were once lesser allies of the crystal weavers—students to their mastery, so to speak.

Ghostwash
The Ghostwash is the largest river in the land, running from the Bitter Peaks in the west to the Great Eastern Sea. It gains its name from the fact that the giants and the dramojh fought most of their fiercest battles near the source of the river. Before that, thousands of human, faen, and litorian slaves were slaughtered in bloody and horrid experiments there, while twice that number died building the citadels of the dramojh. Tales tell that the river carried the ghosts of all who died gently out to sea. Before the war between the giants and the dramojh, the Ghostwash was known simply as the Grand River.

The Floating Forest
The Floating Forest is a strange place where the gigantic gassar trees grow (see the illustration on the next page). These mighty plants begin their gestation far beneath the surface so that, when they force their way up, they tear huge chunks of earth up with them. Other trees and plants continue to grow on these displaced earth “islands” in the air, supported in the tangles of the gassar. This multileveled forest is vast and thick as well as unbelievably tall. The Floating Forest’s ground level is spotted with lakes and waterways, filled from rainfall in places where the earth was torn away. Some islands are so big that rainwater pools fill atop them as well. Occasionally they overflow, creating small waterfalls from one island down to a lower one, or down to the ground. Trolls frequent the forest, often served by goblin slaves.

Magical Effects of the Land

Magic is the leftover power used to create the world long ago. In theory, one day the amount of magic in the world will slowly fade and eventually disappear. This situation is far from the case now, however. The Lands of the Diamond Throne and its neighboring realms are host to many magical effects.

Akashic Nodes
As described in Chapter Three: Classes, areas where many people lived in the past form a kind of resonance that allows akashics to better access the akashic memory. Such akashic nodes are fairly common, particularly in the Southern Wastes, along the east coast, and on the banks of the Ghostwash.

Black Streams
The existence of the dramojh and the damage they did to the land has left what would seem to be an indelible mark on Dor- Erthenos. This corruption isn’t always obvious. Much of the time it remains insidiously hidden. Such is the case with the black streams. Black streams are pure flows of negative energy—the Dark—loose within the world. These invisible currents often change course, as well as ebb and flow in strength. Usually, one cannot even notice them until the negative energy begins to pool in an area. When this happens, the black stream begins animating dead creatures; causing sickness, rot, and decay in living things; and creating a general feeling of malaise, depression, or anger in intelligent beings. Black streams appear throughout the North and to a lesser extent in the South of the realm. They are most common in the Bitter Peaks.