The worlds of Diamond Throne could be even more gorgeous!

Help us to unlock the amazing art of Federico Musetti during this campaign!

The number of planes of existence, magisters theorize, is infinite. Some are truly alien realms with their own logic and physics and bizarre inhabitants. Others are closer alternate dimensions that hold worlds not terribly unlike the one we are all familiar with.

Heavens and Hells
These realms do not fit into easy categories, although some planes are more heavenly or hellish than others. Angelic beings inhabit the more heavenly planes, and demons or devils the hellish planes. These planes exist in varying degrees so that the pleasant and unpleasant qualities of the plane diverge from minor aspects to nearly unimaginable extremes. Some learned scholars suggest that these effects may relate to the planes’ “cosmological proximity” to the theoretical planes of ultimate positive energy and ultimate negative energy. Those places, of course, are called the Green and the Dark.

Planar Movements and Conjunctions
As time passes, the world of Serran and the plane it inhabits comes into conjunction with some planes and moves “away” from others. This means that, during certain periods, extradimensional connections (allowing travel, communication, and conjuration effects) work 100 percent of the time. When this world is not in full conjunction with another plane, there is between a 99 percent and 0 percent chance for such connections to function, or to function properly.

Outsiders on Serran
Despite the fact that interplanar travel is not terribly common, nor is the summoning of creatures from other planes, Serran still harbors many creatures not native to the world. The presence of the vast majority of these aliens is due to the dramojh’s use of the phase heart to rip inhabitants, objects, and places from other planes. Thus, if one is interested in outsiders, one need go no farther than the bizarre land of Thartholan Some of those kidnapped outsiders (or, more often, their descendants) have left Thartholan and now live elsewhere in the realm. Occasionally, a demon or angel (or similar creature) whose truename falls into the hands of a powerful mage will find itself on Serran. Even after the mage dismisses it, the creature’s attention might remain drawn to this world, leading it to interfere in the affairs of its inhabitants. For example, adventurers fighting a coven of harrids might learn that their master is actually a powerful demon working from the shadows. This is the exception, however, not the norm. Beyond the bounds of Thartholan, outsiders are extremely rare.

The North
The Devanian coast, the Harrowdeep, and most land north of the Ghostwash are known collectively as the North. Generally speaking, this region includes the “heart” of the Lands of the Diamond Throne, and the towns and cities there are among the safest and most orderly places in the realm. Northern folk consider themselves a bit more sophisticated than those of other regions, although most would not make such a claim out loud. Generally speaking, Northerners appreciate elegant food and wine, the arts, and communal activities. They are gregarious by nature and usually polite and hospitable. They value aesthetics and convenience very highly. Northern society is somewhat striated, with a strict hierarchy of low-, middle-, and high-class people. They see occupations as very compartmentalized—a Northern farmer is more likely to hire workers to fix his fence than to do it himself because that’s not “his job.” Few people live in the land between the Elder Mountains and the sea. This region gets a lot of rain and cold weather and sometimes is called “the new frontier.” Although once the home of one of the continent’s oldest kingdoms (Devania), it has become a wilderness grown over the ruins of that ancient civilization. The people are mostly herders, trappers, hunters, and miners. They have a quiet, calm, and thoughtful manner. These men and women are far less gregarious than others in the North.

The South
People refer to the lands south of the Ghostwash, down through the Southern Wastes and most of Zalavat, as “the South.” This region is marked by contrasts. The verrik maintain an orderly, ancient society of their own, but the members of other races in the South are more free-wheeling and rough. Many dwell in the region because they or their ancestors moved southward to find a less structured, more free-spirited home. Cities such as Khorl, Jerad, and Xavel are known to be fairly lawless, with less direct control by the representatives of the Diamond Throne—although in comparison to other places (such as the Free Cities of the South) this reputation is usually overstated. Southerners seem less particular about art, food, drink, and other such “sophisticated” concerns than their Northern neighbors. Their concerns are both more base (simple survival, particularly in small villages and hamlets) and more philosophical (freedom, rights of the individual, a person’s rightful place in the world, and so on). Entertainment in the South is usually bawdy and the humor broad. Ale is a more common drink than wine (although verrik always prefer wine). It is more likely that a litorian would find a home of his liking within the bounds of a Southern city than one in the North. They take to the less structured, freer lifestyle in such places over the stricter, more “refined” communities of the North.

The Far South
Also known as the Distant South, this region includes Fallanor, the Free Cities of the South, the Jungles of Naveradel, and even the Wildlands of Kish. People under the rule of the Diamond Throne know little about these faraway places. The occasional trader or sailor brings back tales of the Free Cities or Fallanor: stories of wild, exotic locales, lawless cities and races, and beasts unknown in regions farther north. Only the hardiest and most intrepid explorers can relate information about Kish or Naveradel. These unsettled lands are strange and filled with exotic creatures and amazing wonders. Outside the direct rule of the Diamond Throne, the people of the Far South are much less cohesive than those of other regions. Traits of the population include self-reliance, a distrustful nature, and far less value placed on community, honor, and keeping one’s word. This is a rough-and-tumble place. Customs vary from city to city and change quickly with the rise of new rulers or sudden trends.

The Near West
The near West—Verdune and Thartholan—continues to rebuild from the devastation and changes wrought by the dramojh. Communities are few and far between, and most are governed by paranoia and fear due to the undead and other planar creatures still inhabiting the region. Cities and towns here have high walls and take curfews seriously. You’ll hear people here say things like “better careful than dead” and “trust is earned, not given.” For the most part, these folk remain quiet, somber, and slightly nervous. Yet they are determined and stubborn as well. Most do not have the luxury of convenience or sophistication.

Life in Pallembor
If the people dwelling in Pallembor have some relation to the folk of the Lands of the Diamond Throne, it is tenuous and ancient. In Pallembor, humans and dracha commingle without hesitation, and the sight of a dragon is cause for welcome rather than alarm. The people of the Mysterious West, whether human or dracha, look upon the dragons as powerful guardians and patrons. Villages, towns, and cities of Pallembor are old and sophisticated, filled with statues, colonnades, and fountain-filled plazas. Most have some kind of available roost or castle made especially for dragons who might visit from time to time. The people in these communities are welcoming and friendly unless given a reason not to be. Those who raise the ire of the locals can never hope to regain their welcome, for their memory is long.
The people of Pallembor do not speak the Common tongue but instead have their own language. Also, many speak Draconic.

Life in Skaraven
A harsh land of fierce weather and predatory beasts, Skaraven is ruled by the vulturelike harrids (see Chapter Twelve). Members of the major races (humans, litorians, sibeccai, faen, and so on) dwell here only because they were taken as slaves from their homes and brought here or because their ancestors were taken in a similar fashion. The harrids are harsh masters and force their slaves to carry out all their physical labors, as the harrids themselves are too preoccupied with study and research. Most slaves never live to be very old, between the harrids’ cruel whips and the backbreaking work. Skaraven is mainly a desolate wilderness. Its few cities are fairly large and walled for protection. Whether harrid, human, sibeccai, or another race, most people in Skaraven seem para- noid and pessimistic. Harrids rule virtually all the settlements of Skaraven. 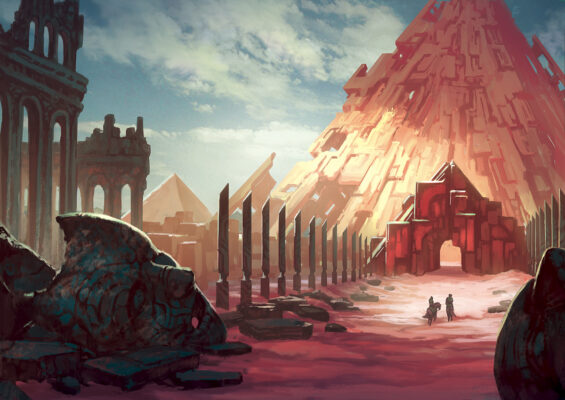