The successful campaign has unlocked special supplements that enrich Diamond Throne thanks to the backers who supported us. If you want to discover Diamond Throne read the articles here on the site or join the many fans on Discord!

In the opinion of many, the gods of the world are gone, or so faded in power that they no longer hold a significant position in the cosmology. The argument goes that if the gods were so powerful (or real at all) as to be worthy of worship, they never would have abandoned so many to the dramojh for so long. Giants and litorians do not worship gods. Neither do the ver- rik, although they do believe that after they die they can ascend to near godhood. The faen and the sibeccai have many gods, although each has its own brand of spirituality. Mojh mostly worship dragons and dragonkind. Dracha worship the dragon god Erixalimar. Humans are split fairly evenly, with about half either disbelieving in or resenting all deities and the rest at least a little faithful in their chosen religion. Because of this attitude toward religion, most temples are old, and many are in poor repair. A great number are abandoned altogether.

The Gods of the Denotholan

Denothol was a great human hero who used legendary perseverance and magic to travel to the mystical realm where the gods lived. His story and his catalogue of the gods, their portfolios, and their relationships is recorded in a book called the Denotholan. The deities described within are called the Gods of the Denotholan. Although there are other gods, they are usually quite minor. The Gods of the Denotholan are those that hold (or held) large numbers of worshippers as well as great sway over their lives.

The chief deity of the Denotholan pantheon, Niashra takes two forms. The first is that of the goddess of nature, or of the land, in which she appears as a beautiful human woman with flowing golden hair and wearing leaves, vines, and flowers. The second is that of the goddess of motherhood and life, in which she looks like a very large, pregnant woman with middle-aged features and children at her feet. Niashra is the goddess of life, of nature, and of loving and caring emotions. She is the most popular of gods, and her temples are usually wide expanses of marble and statuary, with many pools and fountains. The majority stand in populated areas, although some are secluded in more natural surroundings. Her symbol is a woman’s face made of leaves.

Vekik, the Runegod
Lord of science, alchemy, and magic, Vekik as often as not is portrayed as a disembodied, ever-changing mathematical formula. Other times, he appears as a thin, bald male human whose flesh is covered in runes and symbols. Vekik is enigmatic, and his doctrine requires years of study to truly understand. His way stresses logic over emotion and brains over brawn. His worshippers claim that the powers the runechildren possess are gifts from Vekik. He is said to be responsible for maintaining the laws that govern the physical world. His temples are small but usually tall, like towers. His symbol is a composite of various magical and mathematical symbols.

Mowren
Mowren’s duties include overseeing conflict, strife, and war, as well as fate and chance. He appears as a particularly small quickling faen with dice in his hand. When two forces of any kind go up against each other, whether it be two contestants in a game of witch stones, two armies at war, or the force of a river smashing against a rock in the riverbed, Mowren determines the outcome.
People revere Mowren out of a sense of need rather than want. The truth is, most people see him as a meddling trickster who can’t be trusted. Mothers tell their children that Mowren is hiding under their bed and will curse them if they don’t behave. Mowren’s temples are small—shrines, really. Few people worship Mowren exclusively, instead paying him homage when they feel they need his blessings. His symbol is a pair of dice.

Idonis
Truth, beauty, and love: These are the prime aspects of Idonis’ worship. This androgynous deity has both a male and a female aspect and is called both “him” and “her.” Statues of Idonis depict a beautiful human of indeterminate gender with a book in one hand and a zither in the other. His/her worshippers fill their temples with music, poetry, and acts of love. The temples themselves are always round structures and usually brim with statues and flowers, thick carpets, and lavish tapestries. The cult of Idonis is a popular one, although many fear it, believing the worshippers to be drug-addled fools without sense of responsibility. Idonis’ symbol is a hand holding a flower.

Hetragarin
Hetragarin appears as a stern-faced female human dressed in a long silver gown. She watches over time itself, and the flow and order of all things—the passing of child to adult, the passing from skilled to unskilled, and even the passing from life to death. She is extremely regimented and particular, and so are her priests. Her temples are well-ordered structures built in concentric circles, forcing one to follow a specific path to get to the central altar. The tenets of the religion are very strict and quite humorless. Nevertheless, she is a popular patron of many— travelers, students, those wishing to master a craft or skill, and so on. Her symbol is an hourglass.

Johrd Ironthumb
God of craftsmanship, building, and engineering, Johrd Ironthumb is closely related to Vekik, although his worshippers usually find him and his dogma easier to understand than the Runegod’s. Iconography pictures Johrd as a massive male human, or perhaps a giant. His temples are well-constructed buildings, often incorporating some feat of engineering, such as a mighty arch or a seemingly gravity-defying monument.
Worshippers of Johrd Ironthumb are laborers, craftspeople, engineers, architects, and, strangely enough, warriors. His symbol is an obelisk.

The Dead Gods (Hanavere Trinity)
The Hanavere Trinity were three beings of awesome power. In the eyes of most, they were gods. The three of them, Nalos, Tayana, and Seron, lived in a fantastically huge citadel in the Elder Mountains, on the edge of the Southern Wastes. Once, near the beginning of time, they were three mortal humans who discovered a major power cyst (see page 345) so potent that they used its mystic energies to ascend to godhood—or virtually so. The story goes that they then traveled the various planes of the multiverse, exploring and learning even more about the truth of reality. Eventually, the trinity returned to the world of Serran, built their citadel, and shut themselves within it, only occasionally offering audience to outsiders.
When the dramojh began their invasion of the east in Common Year 180, the Hanavere Trinity were alarmed. They took their time, however, marshaled their forces (they had an army of human followers as well as lammasu, centaurs, and giant eagles), and made careful plans. In Common Year 182 they met the advancing dramojh army in the Fields of Yallatonan.

Although the trinity inflicted terrible losses upon the dramojh— more than anyone other than the giants, who would come a thousand years later—the malevolent conquerors used powerful artifacts found in their interplanar raids to bind and slay the godlings.

Now known as the Dead Gods, the Hanavere Trinity lost most of their faithful servants and worshippers that day as well. Most people have forgotten them, other than the occasional attempt to use them as vague examples that “the gods are dead,” when bitterly rejecting religion.

There are still those who worship the Dead Gods, however. The faithful travel hundreds of miles to risk the perils of entering the Citadel of the Dead Gods (as their fortress is now called) because they believe that, once in its highest tower, in the innermost sanctum, one can still commune with them and learn some of the secrets of the universe. 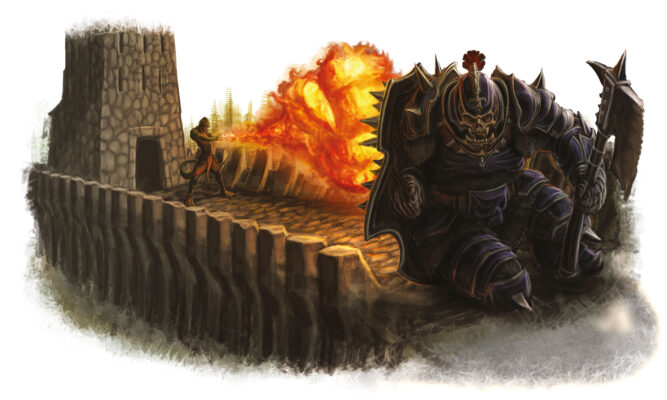